The Covid-19 Shock to Developing Countries 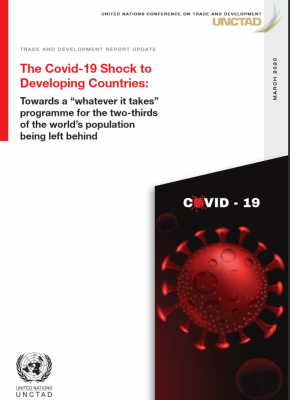 Averting global depressionProjections of the potential impact of the Covid-19 shock on economies around the world for the year 2020 vary widely. However, there is broad agreement that the global economy will contract given the sudden stop to large swathes of activity and the resulting income loss in the manufacturing and services sectors across most advanced countries and China, combined with the adverse effects on financial markets, consumption (through both income and wealth effects), investment confidence, international trade and commodity prices.

For advanced country governments, now scrambling to contain the economic impact of the Covid -19 pandemic, the challenge -- as discussed in our first Trade and Development Report Update1 -- is compounded by persistent fragilities surrounding highly speculative financial positions, inparticular, the already unsustainable debt burdens associated with highly leveraged corporateloans. These have been built up over the last decade of easy money and against a backdrop ofheavily underregulated ‘high-tech-cum-gig economies’ and deeply ingrained income inequalities.In addition, the avalanche of cheap credit since 2008 has also spilled over to developing countries,creating new financial vulnerabilities and undermining their debt sustainability.

In the past days a series of stimulus packages -- unprecedented in both scale and scope -- havebeen announced by the major developed economies and China to extenuate the mountingeconomic damage and respond to the health crisis. Aside from financial injections to keep thebanking and corporate balance sheets on relatively stable footing, the critical measures to avertcontractions of economic activity include government spending (particularly on health care),extended unemployment benefits and cash transfers.

The details still need to be carefully examined but some broad estimates can be made about howthis will likely translate into additional demand and thus national income in each economy.Employing our Global Policy Model, we estimate a boost to the national incomes of advancedeconomies and China of about $1.4 trillion in 2020, substantially smaller than the headline valuesof the packages. This no doubt will have a positive impact not only on their own economies butthe world economy as well.

Although this will, in all likelihood, not prevent a global contraction this year it should (hopefully) avert the recession turning in to a prolonged depression. It should also contribute to stemming thefall in the prices of both financial assets and commodities and will partially alleviate the negativegrowth impact from the crisis on developing countries.

Developing countries, however, face distinct pressures and constraints which make it significantly harder for them to enact effective stimulus without facing binding foreign exchange constraints.And as these countries do not issue international reserve currencies, they can only obtain themthrough exports or sales of their reserves. What is more, exports themselves require significantimports of equipment, intermediate goods, know-how and financial business services. Finally, thefinancial turmoil from this crisis has already triggered sharp currency devaluations in developingcountries, which makes servicing their debts and paying for necessary imports for their industrialactivity far more onerous.