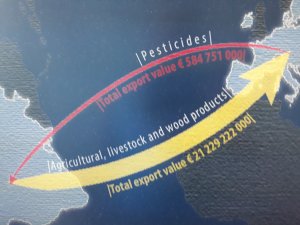 The EU has exported 7000 tonnes of deadly pesticides – banned domestically – to Mercosur countries* in 2018-2019, a study published by the Left group in the European Parliament has found. In 2019, German multinational BASF exported more than 550 tonnes of fipronil – banned in the EU to Mercosur. The poisonous substance causes chronic health problems and is harmful to bees and other pollinators.

These dangerous substances return to the EU through food imports, the report shows. In 2018, Argentina exported € 71 million worth of pears and apples to the EU despite the fact that 14 of the pesticides prohibited for use in the EU are used in the cultivation of apples and pears in Argentina.

The EU-Mercosur Agreement is expected to exacerbate this ongoing disregard for people’s lives and biodiversity in what the author calls the ‘circle of poison’.

Rich in figures and infographics, the report also raises the alarm about the expansion of land use to satisfy demand for biofuels in the EU, equivalent to the territory of Portugal, and land for soybean cultivation, equivalent to the size of France.